Greetings readers as this blog finally wakes up from its unprecedented slumber, but it is with absolute emotional joy to pay congratulations to the already well-received film, Inside Out. Of course, I am very apologetic for the unexpected absence (I will write an in depth post on it soon, please stand by), but it is with great regard that I will explore some possibilities for bringing the emotional journey from the big screen to the big dome. 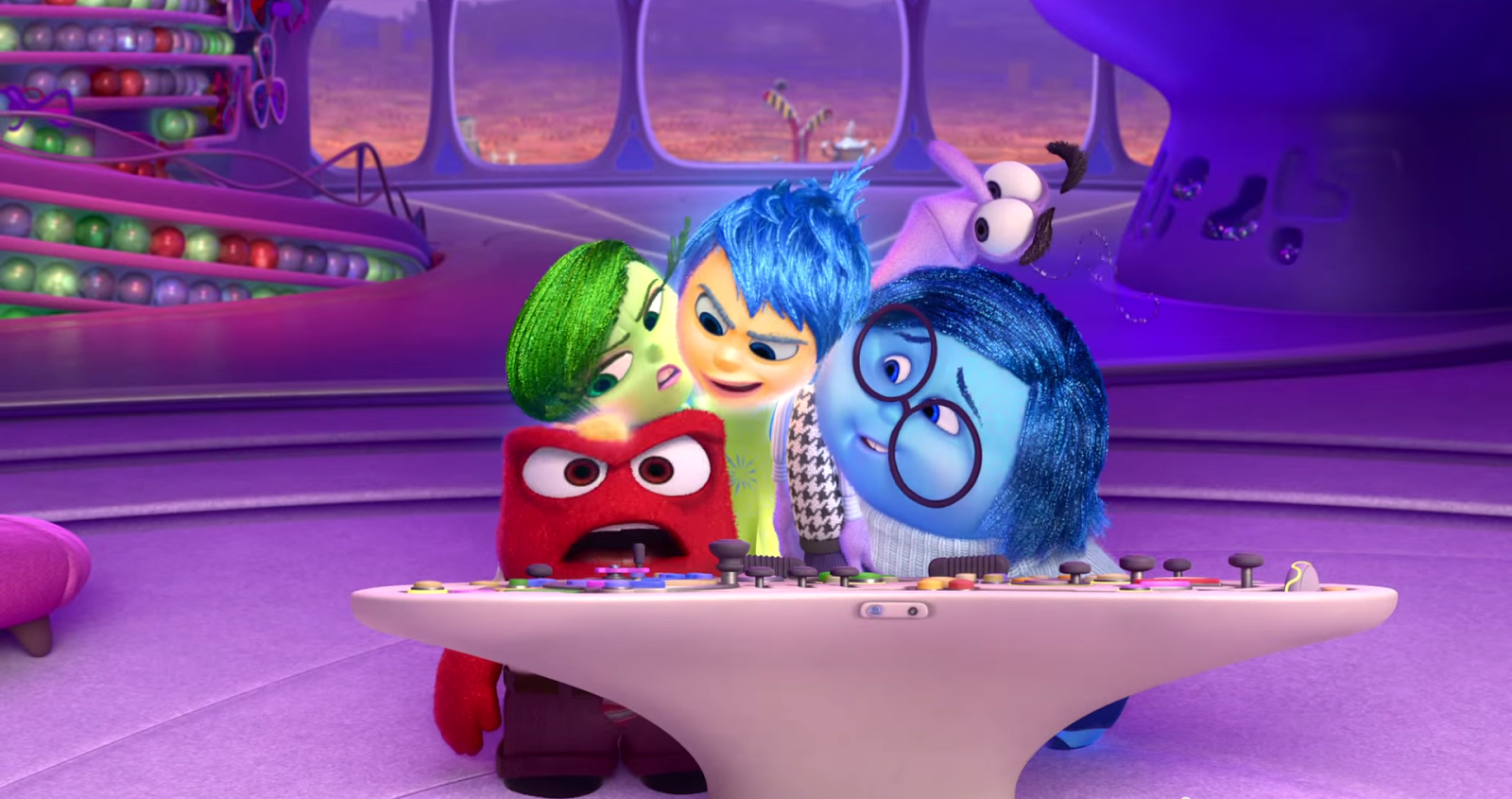 For those who are literally in the new, Inside Out follows on the five emotions - Joy, Sadness, Fear, Anger and Disgust, as they manage the many facets in Riley's mind - memories, personality, dreams and the like. Of course, it is also an adventure in itself, as the dominant emotions, Joy and Sadness, inadvertently find themselves outside of Headquarters and throughout the world of Riley's mind and its divisions. Where and how it ends, nobody wants to spoil, but the subject of growing up and facing new challenges - moving house, new relationships, etc. - is well orchestrated and approached.

As many people have realised, for those who have been looking at past EPCOT and Disney history, Inside Out has some uncanny links – as I have cited in the previous article Brainy Connections, Pete Docter is known to have worked on Cranium Command as the animator, and hence apart from extensive research with psychologists, and also his family experiences, has added to the influence of the exploration of the mind, and judging from how well received the film has become to date, the whole team has successfully done it excellently.

But let us consider the previous following food for thought (555!)... we know that Cranium Command focuses on the brain-body relationship, while Inside Out purely focuses on the mind... it seems that in the context of the Wonders of Life attraction, the two might be able to unite, crossover permitting, but already there is some talk on when and how to fully incorporate Inside Out for a possible ride in EPCOT Center.

Wonders of Life Eterna has been researching possible technologies, as well as individual thoughts on which new attractions or concepts would be considered useful to resurrect, or even renew in today's day and age. But already many, many people on the web are happily discussing many interesting possibilities. Although Wonders has previously written many strategical articles for Cranium Command's return (here, here and here), it's time to review forum talk going on the WDWMAGIC thread, "Inside Out Being the Focal Point on the now defunct Wonders of Life Pavilion", for starters. Of course, there are more, but let's say they are points for mind-stimulating discussions for fleshing out the attraction, but in this case, let's have Wonders of Life Eterna walk through each location, and figure out which Emotion, or even which location in Riley's mind, would fit excellently.

When planning either a revival or a restructuring of a pavilion, especially in the context of an Epcot attraction, it is important to consider the scope of our nominated new settlers, the Emotions. In short, how much golden dome would we allow them to settle and occupy (but let's be democratic here). Some say that we leave Inside Out limited to only one attraction (which would be usually Cranium Command, due to the relationship with, yes, the head), while some believe that due to current success, that our fellow Emotions deserve full reign of the pavilion. But it all depends on the context of the attractions, and especially the desired focuses on each part of the movie, or better yet, which parts would emphasise the theme of, let's say, exploration of the human mind, or tying it to life and health somehow.

In the Wonders of Life pavilion, the first thing anyone would likely notice back then would be the iconic Tower of Life DNA strand monument - the visual draw to attract visitors through the pavilion's main two attractions - Cranium Command and Body Wars. But suppose that Inside Out became settlers of the entire pavilion, or maybe one attraction thereof. How would we attract people to the pavilion and invite them on a journey on the human mind? Or better yet, how would we sum it all up to be enticing enough to invite?


Epcot: Exploring the Mind with Inside Out by Xelku9 on DeviantArt

One visual example, as I included from a very visually imaginative armchair imagineer, has decided to imagine how the entrance is going to be. The main object focus, synonymous with the film, are the memory spheres from the film, and as the image provided shows, the entrance sign definitely fills the void of the entrance archway used in Wonders, many many years past since '89, before the pillar sign. In a visual sense, I find it rather appealing, and it would definitely be a visual draw and identity of the pavilion, had the Emotions moved in.

With the entrance covered, we need to figure out what attractions deserve to share the space at the Wonders of Life pavilion. Given that Wonders already has an assortment of attractions to attract and entertain guests, here are the types of attractions that best suit Inside Out making the pavilion their home.

In its previous incarnation, Frontiers paid tribute to the many advancements in medical innovations. But suppose we took the next leap forward into exploring the mind. We know of many aspects of the human mind, such as feelings, communication, ideas and anything else that makes us human. But that will not stop there. In fact, there are many aspects of psychology, especially in the medical terms - from neurodiversity (the autism and aspergers spectrum) to clinical conditions (depression, bipolar, and other related) or even technologies that can interact with our brainwaves and thoughts – the list would go on, and it would hopefully make for an interactive and intellectual companion for the other at actions as well.

And it's inevitable for me to admit that, yes, Cranium Command, sharing its influence and its theme with the film, is sadly not safe from the invasion of the Emotions. But I'm not going to be pessimistic about it either. There are a couple of ways that Cranium Command could find new life somehow with the Emotions in the pilot's seat. One way would be to retool Bobby's head into Riley's - to have it entirely into Headquarters, and to have Joy at the helm of the controls. Joy would likely pilot Riley through many of the numerous adventures, and even call on at least one or more of her friends through the numerous screens.

But another way would not only fuse the mind-body relationship a little higher, but let's say that Captain Buzzy (or a female counterpart!) would still be at the helm, looking after Riley, and even calling on the Emotions for help (on second thought, the Left/Right brain theory by now is no longer commonplace or plausible... sorry purists!). While Docter didn't want to focus on the actual "neural-flesh-and-blood" aspect of the mind (sorry, Docter), it is nice to see a potential crossover with Buzzy and the Emotions pilot Bobby or Riley (or whoever) happen in the theatre.

And with regards to these little thoughts on how our Emotions will make it quick to settle at least a part of Wonders of Life, however suitable for its worth, and hopefully give it the revival that might be of good use. But how it happens... let's say that Disney is hard at work looking at the numerous ways of potentially making this possible. So if anyone has some suggestions or thoughts, or even some opinions on their own, feel free to post in the comments below!

Until then, a good friend, whom I shall refer to as @robjyeo, has put together a brilliant infographic describing the schematics of Riley's mind as portrayed in the film, which will hopefully jog some of yours, too! Cheers!

Posted by RabidLeroy at 11:50 PM 0 responses to this issue

Latvijas
NOTE: Machine translation may not be accurate

Most ambitious act of activism yet...

Currently You Are Visitor Number:

What's on your mind?

On My Global Doorstep

Who's following WOL4EVA? Don't be afraid to sign up!

Brought to you by the Gutsy Challenge