What is "Wonders of Life, Eterna" anyway?

Let me start things off, fellow blog readers... this is my very first post submitted to this web-shrine dedicated to everything that once was the Wonders of Life pavillion - a former top attraction that once stood at the Experimental Prototype Community of Tomorrow... which you may know as EPCOT Center from the 1980's... or simply Epcot in today's day and age.

For those not very familiar with what I'm talking about, I'll drop you a little piece of history here and there... so, once upon a time, on October 31st 1989, the Wonders of Life opened its doors loudly for the first time (but some say it opened its doors with a gradual 'soft' opening on October 18th in the same year.) The video below shows us a few glimpses of the pavillion's first hours...

Now any of you readers who have been there during the pavillion's heyday might remember the Metropolitan Life blimp with Snoopy on it... want to know why? In EPCOT's early years, the pavillions used to get by with the help of corporate sponsorship, and in the case of Wonders of Life, Metropolitan Life was the ideal sponsor during the years from 1989 to 2001. Thereafter, sponsorship was dropped, and the Wonders of Life pavillion managed a further 2 or 3 years by itself, before mainstream operation ceased in 2004.

But the Wonders of Life's final curtain calls were during the busy holiday seasons (the holiday periods in the lead up to Christmas and the New Year) of 2005 and 2006, and then finally giving up the ghost on the date January 1st, 2007. At this point, almost all of the components of the pavillion were gradually gutted out. Sad! :(

And here it was now, as of June 2009... a forgotten desert dome, now re-used as a convention center.

But there's an interesting side to the blog... I have never personally set foot on EPCOT center during its heyday (because the park was born way before my birthdate, obviously!), nor was I there on the opening of the Wonders of Life pavillion, nor have I been on their signature rides... ever! But I side with those who have fond memories of what it's like to be on board the good ship probe Bravo 229 on a bumpy journey through the heart, lungs and brain...

...or witnessed what it was like to work as a brain pilot of a 12 year old adolescent boy... 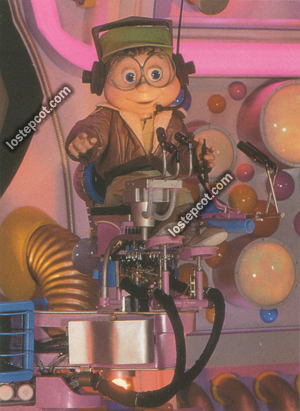 You can find him at: http://www.lostepcot.com/craniumcommand.html
...or listened in on a tale of where we biologically came from, and how we were born. Some of us have memorabillia, photos, soundbites, that we may have hung onto for others to share. While all may seem to be lost, it would be rather courageous for us to share them together.

But there are a sufficient few who believe that the pavillion may face the following fates:
And despite my age, my view on the pavillion's fate (if allowed) would be restoration, for all to see. Yes, it's costly in monetary terms, but I can happily justify the cost, using this as a reason...

In my view, my generation, as well as the generation after that, is inhumanely deprived of what makes the Wonders of Life pavillion the most successful (and secondly missed after Horizons) pavillion during the prime of EPCOT center, educating visitors on the body, as well as good healthy habits, while entertaining patrons in the most memorable ways possible... in the kinds of ways you would not expect to find in a textbook. Although some of the atractions were 'frozen' in time since the brink of the 90's, I believe that in response to health issues popping up in the media, the Wonders of Life pavillion still has relevance today... it's just that it's been bottled up for too long.

On a more optimistic note, this blog also bears links to the most fascinating facts on EPCOT center, then and now, plus there's also an opportunity for webguests, or veterans of the original EPCOT park (whether you used to work here or come here or even read about it in a book) to post a comment, or potentially some suggestions!

But this blog also has a hint of Imagineering ingrained in this blog... just imagine, what would happen if the pavillion were to re-open... should the classic attractions be restored (or updated as close as true-to-heart can be)? Maybe some interactive exhibits? Or what's the worst that could happen to the poor pavillion? Plus guess what - commenters can also join in on the fun and submit potential ideas for bringing the great Golden Dome back into the public eye... and more hearts.

And if you're wondering who's this, then surprise! It's RabidLeroy! You may remember me the most from my DeviantArt account, as the artist-Stitchfan-genius I am! But due to this nature, I might want to warn you that if you're not accustomed to further Mouse-fication of poor old EPCOT, or you're not fully immersed with Stitch-related references, read this blog with caution.

You have been warned.

Got it?
Posted by RabidLeroy at 7:44 PM 0 responses to this issue

Latvijas
NOTE: Machine translation may not be accurate

Most ambitious act of activism yet...

Currently You Are Visitor Number:

What's on your mind?

On My Global Doorstep

Who's following WOL4EVA? Don't be afraid to sign up!

Brought to you by the Gutsy Challenge